A dog has been spotted chained up and abandoned as flood waters from Hurricane Harvey rise around it.

Photographs taken on Saturday by the DailyMail.com show the dog chained to a telephone pole in Victoria, Texas. Where as much as 10 inches of rain have inundated the area in the past 24 hours. The photographer unleashed the stricken dog from the pole and brought it out of the water to safety. The county remains under a flash flood warning; and Texas officials have warned repeatedly against leaving pets and livestock tied up in the elements. Nearby in Victoria, another dog was seen chained to a tree outside a mobile home in a puddle of water; also seemingly abandoned.

In Roman Forest, Texas, about 150 miles north of Victoria; the police chief minced no words when it came to animal abusers. 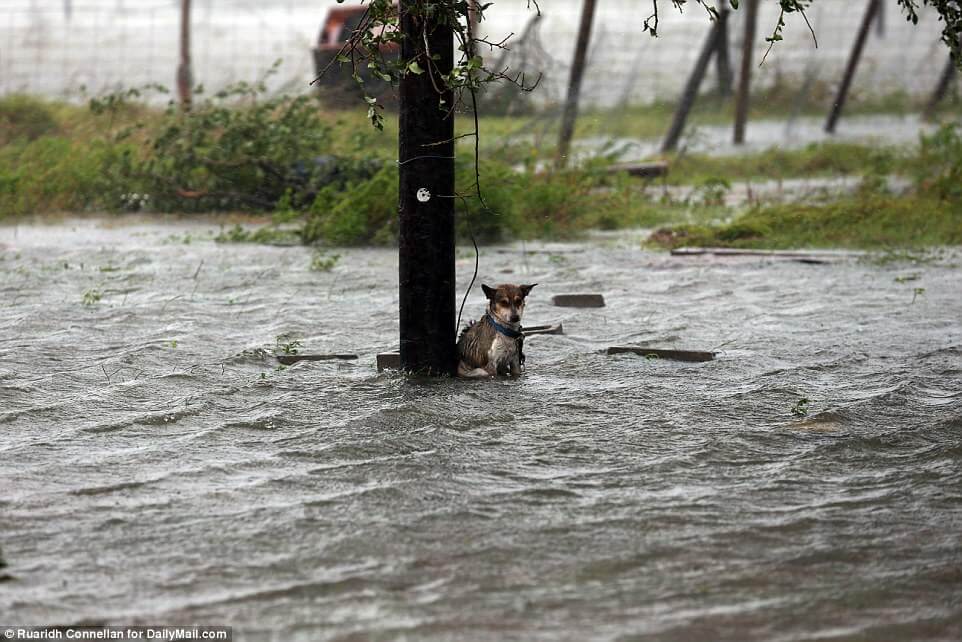 A dog is abandoned on a property off US-77 in Victoria, Texas on Saturday. The area has seen heavy rain and flooding

‘I promise you, that I will hold anyone accountable that unlawfully restrains their dog in extreme weather conditions;’ Chief Stephen Carlisle said in a statement on Friday.

‘Dogs are your family members too.’ 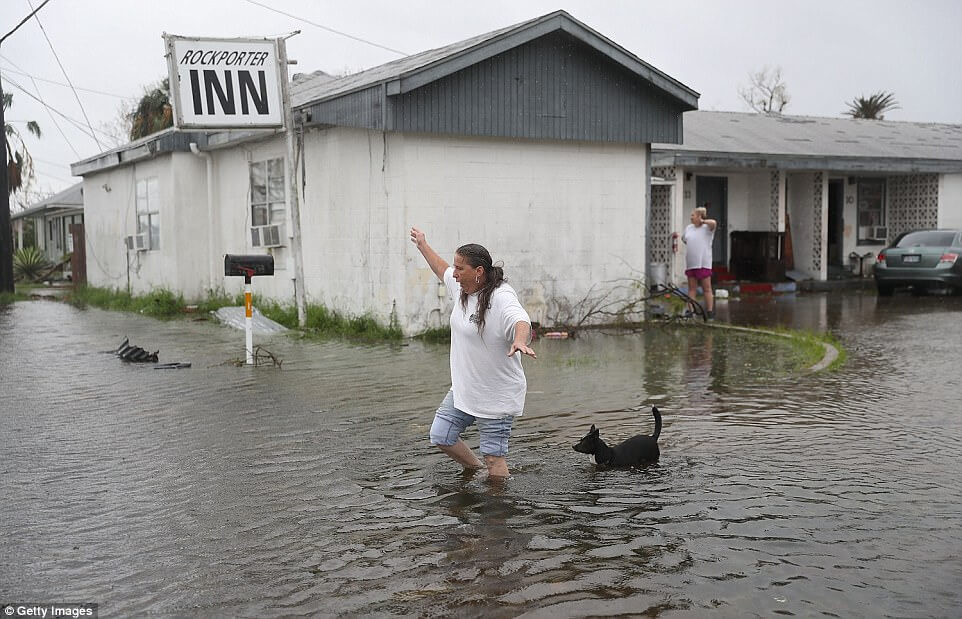 In Rockport, Valerie Brown and her dog walk through a flooded area after leaving the apartment that she rode out Harvey

Carlisle pointed out there is a specific state law that prohibits leaving a dog tied up outside in any extreme weather conditions; including under a hurricane or tropical storm warning.

‘Please do not keep your family members tied to a rope or chain’ the police department in Montgomery County said on Facebook. ‘It is against the law to keep a dog on a chain during extreme weather conditions.’ 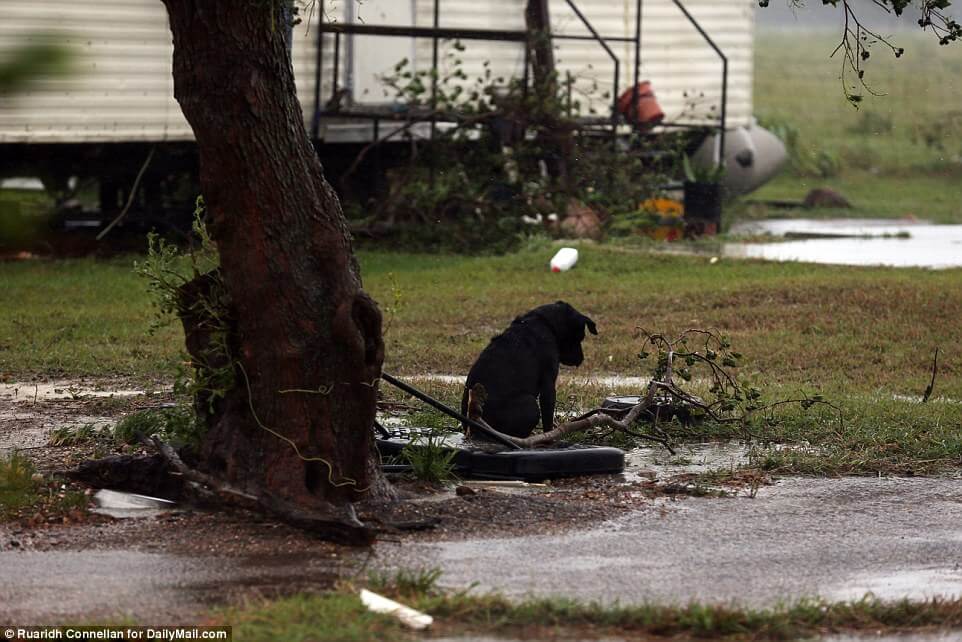 Another dog was seen chained to a tree outside a mobile home in Victoria on Saturday; also seemingly abandoned

Victoria County, where the dogs were spotted abandoned, was directly in the path of Harvey’s harshest weather, and has seen six to 10 inches of rain in the past 24 hours.

The area is under flood warning and is expected to see continued rain and thunderstorms throughout the night. 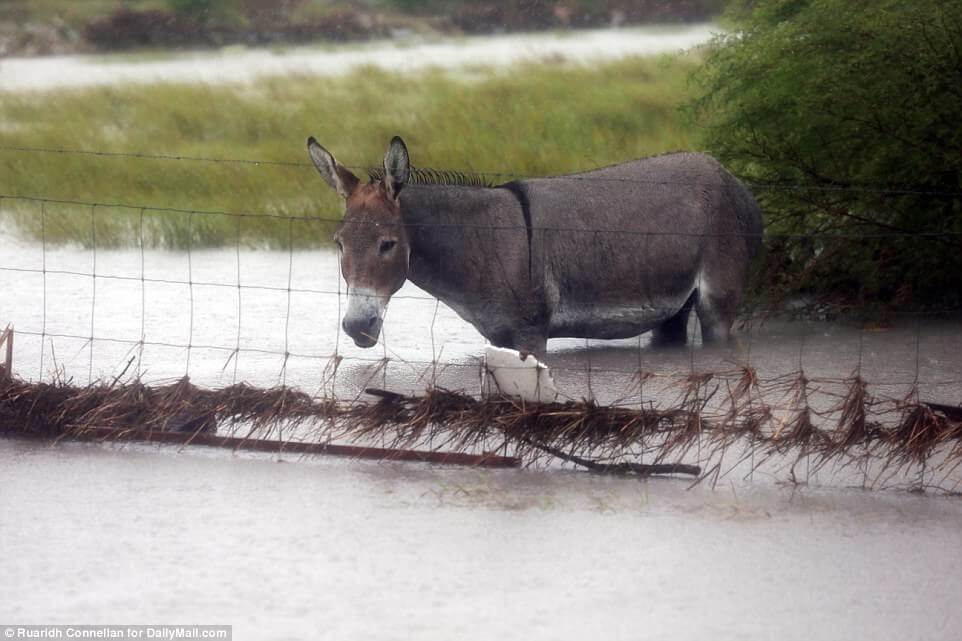 In Rockport, Texas this donkey was spotted wading belly deep in flood waters as rain continues to fall on the area

Across Texas, eight million residents have been warned the worst is yet to come. As hundreds of thousands of shell-shocked Texans on the Gulf Coast began to pick up the pieces after Harvey destroyed homes and businesses; left several injured and the state facing a clean-up bill of $40 billion.

Texas utility companies said more than 338,000 were without power and the coastal town of Rockport, 30 miles north of Corpus Christi was hardest hit as the storm – which has weakened to a tropical storm with winds of 70mph – settled over southeast Texas.

The storm will sit over the Lone Star State well into next week pounding hundreds of miles of coastline with life-threatening storm surges; causing deadly walls of water to move inland.

With streets flooded and strewn with power lines and debris; authorities warned the storm’s most destructive powers were just beginning. 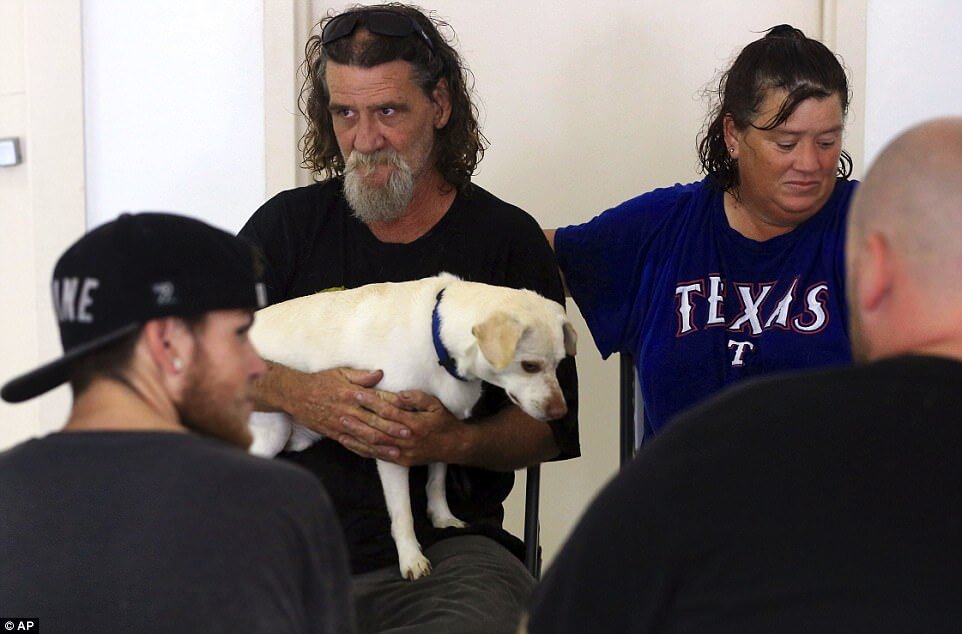 Happy Newman, his dog; and Tammy Newman wait at a shelter after Hurricane Harvey landed in the Coast Bend area

Rainfall that will continue for days could dump more than FIVE FEET of water and inundate many communities; including dangerously flood-prone Houston, the nation’s fourth-largest city.

A disaster declaration has been made for 50 counties. 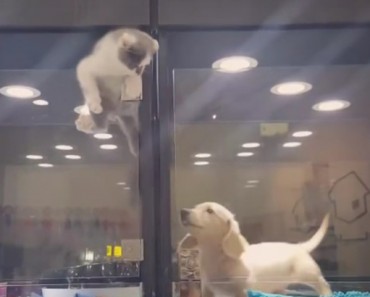 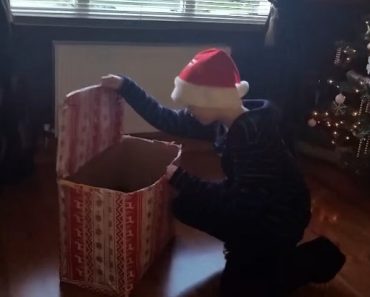 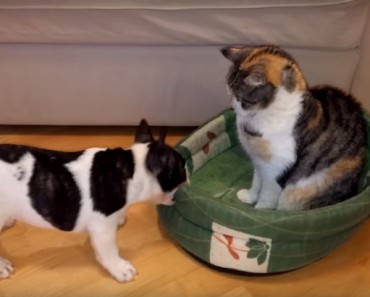